Our global nutrition team recently reviewed its opinion regarding the use of organic trace elements. They reached this decision after extensive literature research, discussions with main suppliers, and internal reviews with primary stakeholders and users of these products
from all corners of the world.

There are two hypotheses regarding the mode of action of organic trace elements:
1. The bonded trace element sources prevent the metals from creating undesired bonds with other substances. Minerals from inorganic sources can bind to phytate, fiber particles, clay, ammonia, VFAs, sulfur etc. This might lead to lower bio-availability. Examples of this are:

2. Minerals bonded to amino acids may be absorbed more easily by the gut wall (this has not yet been conclusively proven). For example, one study showed that adding methionine to a human diet doubled the absorption of Cu (Goff, 2018). Much is still unknown about the absorption of bonded metals. Some studies show that the metal is dissociated from the ligand, others show that the metal and the ligand are absorbed as an intact complex. Research from Gao et al. (2014) gave a strong indication that AA-bonded metals are absorbed more easily and that they are not absorbed via the standard inorganic transporter. These results were found in an in-vitro model, using Caco cells. In a similar model, one supplier showed that their glycinates were absorbed more easily
than sulfates. However, it is not clear whether it is necessary to include AA-bonded metals in the feed, or whether the presence of amino acids in the intestines (close to the metals) is enough to allow metals to bind to AA in the gut.

If organic trace element sources work in accordance with the mode of action suggested above, their bio-availability should be higher than that of inorganic sources. 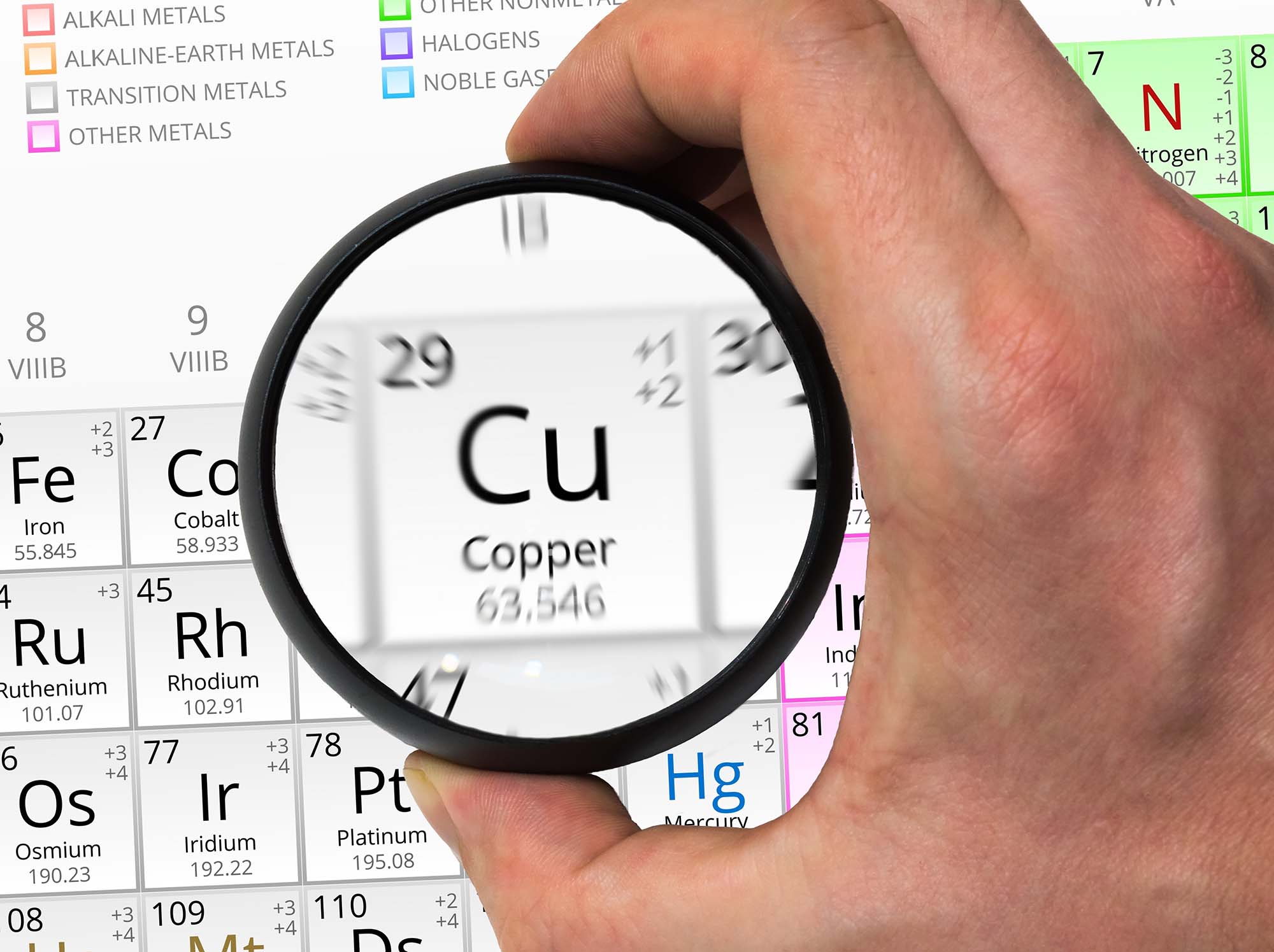 There is no standard way of measuring bio-availability. One may for example use the fecal method (comparing the metal content of an animal’s feces to its intake), or measure the accumulation of metal in certain tissues (liver, tibia, plasma). However, bio-availability is always defined relative to sulfates. Based on literature and data from our suppliers, we
can say that the bio-availability levels of the different products are quite similar (125% - 135%). Taking into account that the measurement methods are not very accurate and not standardized, we can assume that there is no real difference between the products.
Hydroxy minerals are only soluble at a pH lower than 4; they are insoluble in the upper GI tract (rumen), resulting in less undesired bonding of the metals with other substances. At lower pH (in the stomach), hydroxy minerals dissolve, resulting in the formation of Zn-OH and Cu-OH. How these components are absorbed in the gut is unknown, but it seems unlikely that their absorption uses the same receptors as AA-bonded compounds. This means that the above-mentioned hypothesis 2 most likely does not apply to hydroxy
minerals. Given the fact that bio-availability is similar for all the main sources, it is questionable whether the mode of action described in hypothesis 2 plays a significant role in its determination. It is more likely that hypothesis 1, the prevention of antagonism and undesirable bonding to other substances, is the main driver for the increased
bio-availability of all the products. 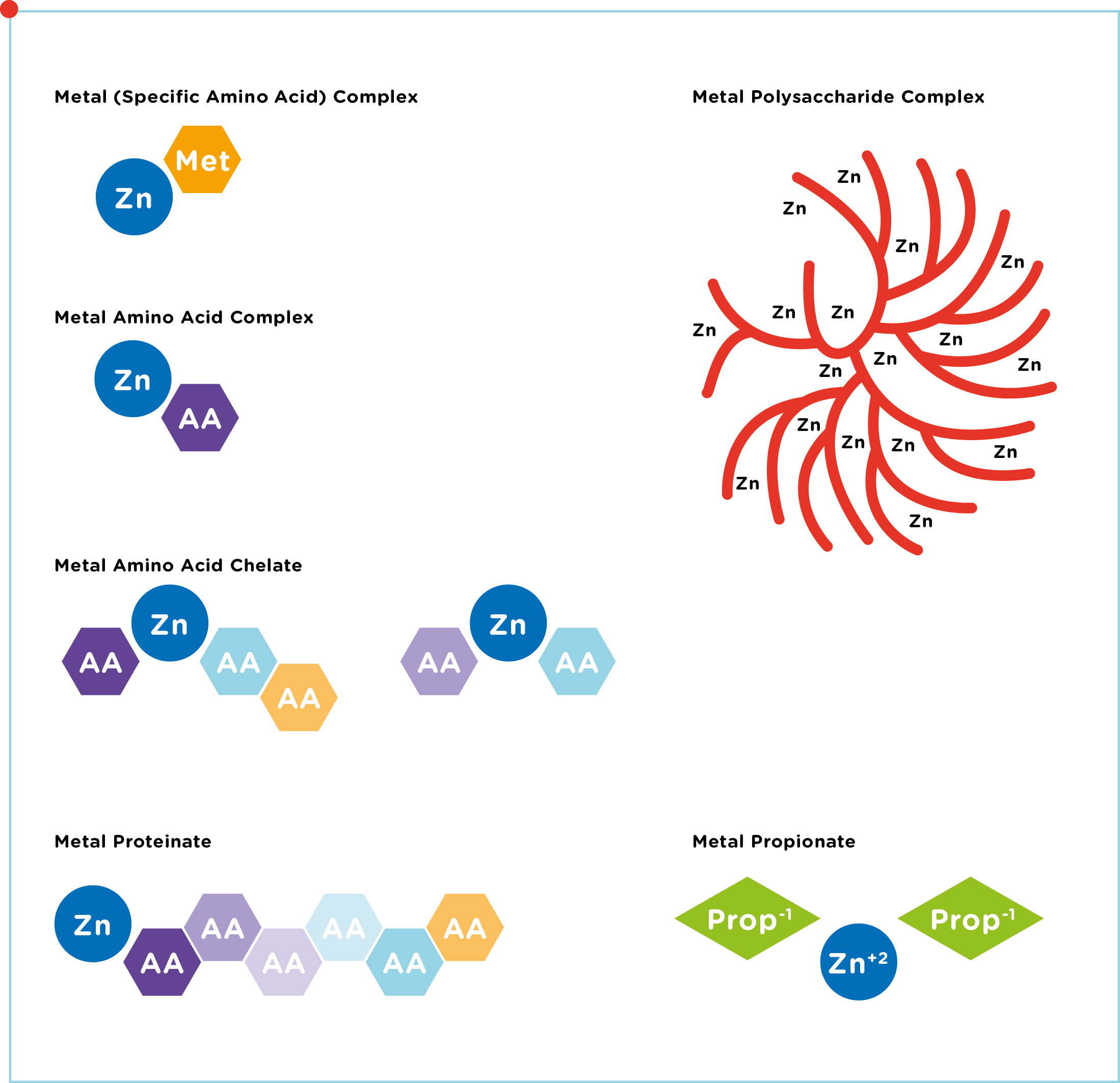 Organic vs sulfates
The ultimate question, of course, is whether higher bioavailability also results in better animal performance. Many trials can be found in the literature and supplier info in which organic trace elements performed better than sulfates, but other trials dispute this. Overall, it is unlikely that using feed with organic trace elements is more advantageous than feed with sulfate trace elements, especially when one considers the difference in price.

Organic vs Organic
The similarity in the bio-availability of the different sources that we found is in line with the comparative studies that have been published in literature and by suppliers. Though not many of these studies have been conducted so far, each of these studies has tested
two different organic minerals against each other. At this stage, we cannot conclude any more than that the main sources of trace elements do not differ greatly in terms of bio-availability and animal performance.

Although the differences in bio-availability and animal performance between the various available products are negligible, the differences in price are significant. As such, it is best to carefully consider whether and where to use products with organic trace elements. We recommend the following:

If you wish to discuss this subject in greater detail, please do not hesitate to ask your Koudijs contact: we are always prepared to share our ideas.

Selection and validation of the most effective ingredients to de-activate m...

Savings or Safety? A critical look at the use of phytase

A problem is only a problem when there is no solution