Research has shown that young female broiler breeders use a significant portion of their body reserves to lay an egg. It is therefore important for the body reserves to be sufficiently built up by the end of the rearing period and to be in proper balance, otherwise this can have adverse effects on chick quality. The study looks at the effects of the female broiler breeder’s body composition (= reserves) and body weight on the composition of the hatching egg and chick quality. The aim of the study was to produce mother hens with different body compositions by the end of the rearing period by applying different feed strategies. As a result, during the rearing period various bases were established for the production period, and therefore for the remainder of the study.

Female broiler breeders arrived at the research farm as day-old chicks, after which they were reared in accordance with various weight curves. During the rearing period, one group followed the currently recommended growth curve. The purpose here was to generate the desired standard weight in accordance with current practice. The second group followed a higher growth curve and was targeted to be on average 15% heavier by the end of the rearing period. The results from the trial show that the desired objective was achieved. The second group of mother hens was on average 400 grams heavier by the end of the rearing period. They achieved the heavier weight by accumulating 30% additional body fat and 14% additional body protein, among other things. The differences in body weight were sustained through to the end of the production period. On average, the mother hens in the second group were 560 grams (+14.4%) heavier at 60 weeks.

Next Steps in the Study

It is therefore possible to change the body composition of mother hens on the basis of feed strategies. At the research farm we had different groups of mother hens of varying weight on the one hand, and increased body fat content (see Figure 1) and declining body protein content (= muscle) on the other hand. 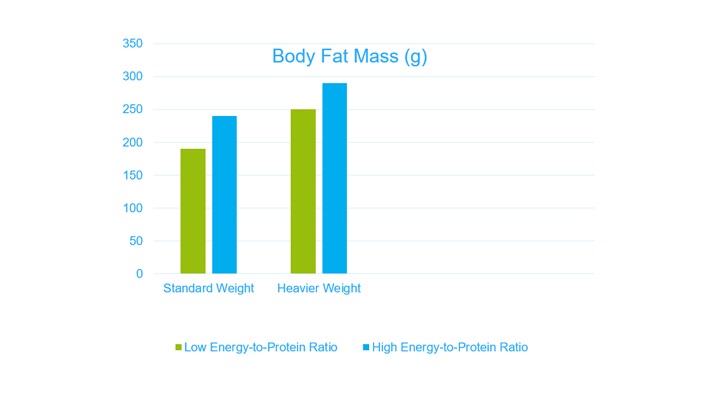 During the production phase the effects on the composition of the hatching egg and/or chick quality were investigated. The quality and composition of the hatching egg were established every other week. Eggs were hatched every three to four weeks, whereby the fertilisation, hatchability, embryo development and chick quality were scored at the time of hatching. By hatching the eggs at different ages of the mother hens, the study provided due consideration to the production phase. It is of course possible that young mother hens respond differently to the feed strategies than older mother hens and this in turn may affect chick quality. The offspring were placed in our broiler research farm, where the technical performance and the slaughter yield of the offspring was measured.

All offspring trials were completed by mid-2020 and consequently the largest part of the study was completed then as well. With the results of this study we are able to adjust nutrition during the rearing and production periods, whereby both the mother hen and the offspring are optimally fed. This way we are able to secure high chick quality and an effective start-up of the broilers produced by the female broiler breeders.