Cereals are the major part of poultry diets, especially the soluble non-starch polysaccharides (NSP’s) of these raw materials are the biggest cause of digestive problems. When NSP’s make the digesta viscosity too high, production results will go down and often, medicines are needed to restore intestinal health of the animal. To prevent getting these negative effects, NSP enzymes are needed.

These enzymes must succeed under a wide range of circumstances and different raw materials. Also the enzyme must be economic in the final product, with satisfactory stability in premix, feed and during the pelleting process. The NSP enzymes give extra added value in countries where wheat, barley, triticale and oats are commonly used in higher inclusion levels.

Non-starch polysaccharides (NSP’s) are complex carbohydrates, other than starch and sugar. They are primarily located in the plant cell walls (figure 1) and are the major part of the dietary fiber fraction of the raw materials. NSP’s are largely undigested by monogastrics. The group of NSP’s are divided in soluble and insoluble NSP’s. Soluble NSP’s are poorly digestible and can only partly be fermented by the microbiota, broken down to short chain fatty acids, which can be absorbed and used as energy source.

The rest of the soluble NSP’s are actually giving the problems in the animals (anti nutritional factors). This risk is bigger when using raw materials containing a lot of soluble NSP’s. They increase viscosity and have a gelling effect causing encapsulation of other nutrients, making them less available for digestion, resulting in a lower nutrient absorption. As a result, more nutrients are available for (pathogenic) bacteria which increases the risk of microbial overgrowth in the hindgut, consequently leading to digestive problems, like dysbacteriosis.

However, the biggest part of the NSP’s are insoluble, also called the inert fibers. These inert fibers, are not digestible, but are beneficial in the diet, because they play an important role in gut functioning, which leads
to better digestibility and gut health. These good fibers promote the peristaltic and anti-peristaltic movement of the digesta in the digestive tract, which leads to better digestibility of the overall diet and better gut health. Unfortunately, these good fibers also hold some of the potentially digestible nutrients captured, the so-called
‘cage effect’.

For digestion, soluble and insoluble NSP’s are necessary, but when the soluble part is too high, digestion problems start to occur. To eliminate these negative effects, NSPenzymes are very helpful.

How does it work?

NSP’s are present in all raw materials, whereas the soluble NSP’s are more present in the cereals. Therefore the use of NSP enzymes in feed is generally accepted. There are many NSP enzymes on the market with more than 25 registered in Europe.

How to compare and select the enzyme that fits your circumstances best?

To know which enzyme is preferred, it is important to know which cereals are used and for which animal it is needed. For example, barley contains a lot of soluble ß-glucans, whereas wheat has more soluble arabinoxylans (figure 2). It is important to know if the NSP-enzyme can break down both types of soluble NSP’s and if a feed mill produces feed for only one type of animals or more. The best NSP enzyme therefore depends on the type of NSP’s it has to break down, for which animal species (desired flexibility) and under which processing conditions in the feed mill they are used.

With the use of NSP enzymes, the carbohydrate fraction digestibility is improved but a rather large effect is measured on the metabolic energy value of raw materials and subsequently the diet as a whole. This is mainly coming from releasing valuable nutrients, such as fat and protein, that were initially caged by the NSP’s and therefore undigestible. The additional energy can be applied in the matrix of the raw material. It is
recommended to add the extra energy value to the raw material and not to the premix, when NSP enzymes are included. 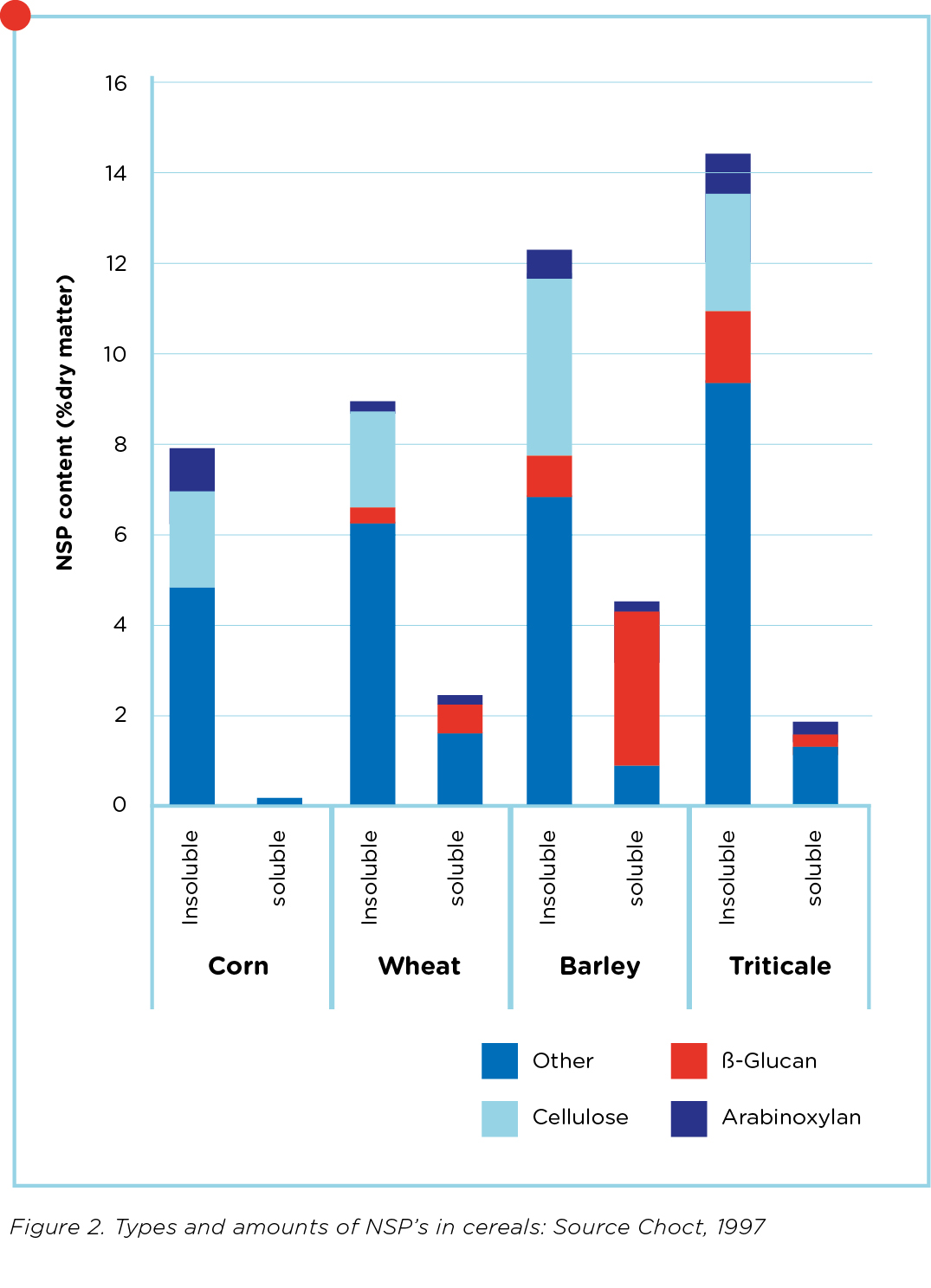 All enzyme producers put a lot of effort to demonstrate the efficacy of their product. As a nutritionist it is almost impossible to compare all the available information on a like for like basis. Therefore, we combine additional research in our poultry research farms with field trials on dedicated farms to fully understand and directly evaluate the efficacies under real life conditions. Koudijs has compared the effect of different NSP enzymes on the most relevant performance indicators for a wide range of commercially available enzymes. Table 1 is an example of such a comparison of a subset of commercially available NSP enzymes on broiler performance. This gives us the possibility to select the
enzymes on basis of the performance for the specific circumstances on different farms and raw materials used in the diets.

In this trial single and multi-enzymes were tested. Although they are working on different nsp’s, the multi enzymes did not perform better in this particular trial. Depending on the raw materials which are available and specific problems which are seen at farms, multi enzymes can be used for example as a problem solver or as an additional insurance. Together with Koudijs, you can decide which NSP enzyme is best serving your purposes, combining the best financial and optimal technical results. 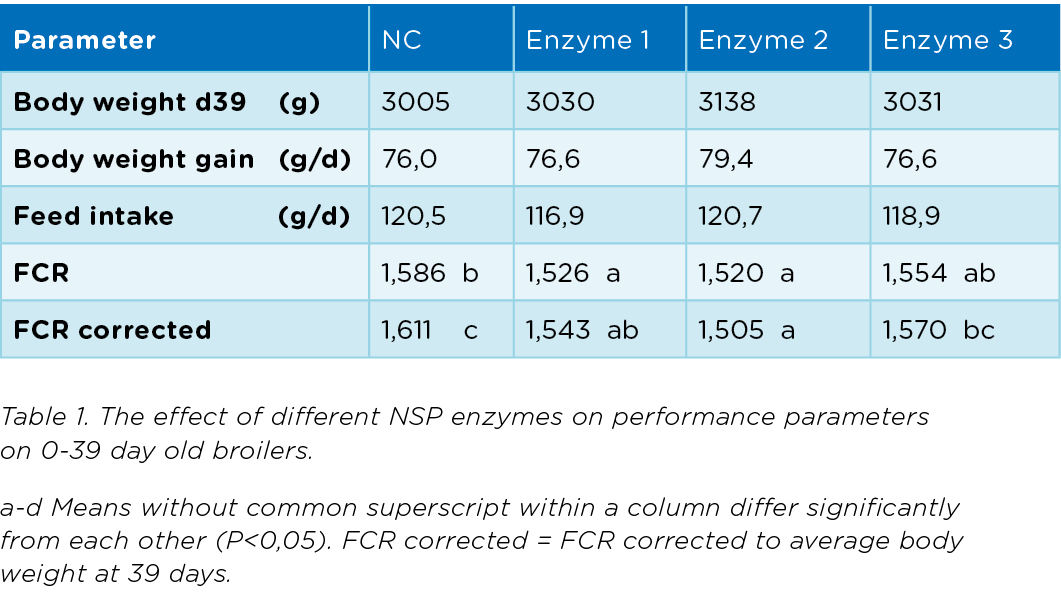